After clearing campus, I worked with BusinessNow Magazine briefly. I got to interview many people during the few months I worked there. Among them was Jamesons Brand Ambassador at the time, Nelson Aseka. That was one of my best interviews yet. I discovered that I still had the soft copy of the story that was published in the magazine’s August issue. Here is the article that went to press. It has not been edited and was meant solely for a business magazine so the language might be a bit business-like.This is how the story ran..

THE WHISKY CONNOISEUR
“I have a penchant for the finer and refined whiskies”, says  a gleeful Nelson Aseka. He is Africa regional brand ambassador for Jamesons, Chivas ,Royal Salut, The Glenlivet and Ballantines which are premium whiskies owned by Pernod Ricard, a French company. Being the face of such strong brands, he is forgiven for using jargon like ,’luxuriously rich or smooth’ to describe whisky.
Born and bred in Eldoret, he attended Moi Forces High school and later joined Kenya School of professional studies to study IT. He was employed AMREF in 1998 to practice IT. He worked as an independent it contractor between 2005 and 2007.Working from the comfort of his home he had a lot of free time and he would meet up with friends on weekends. 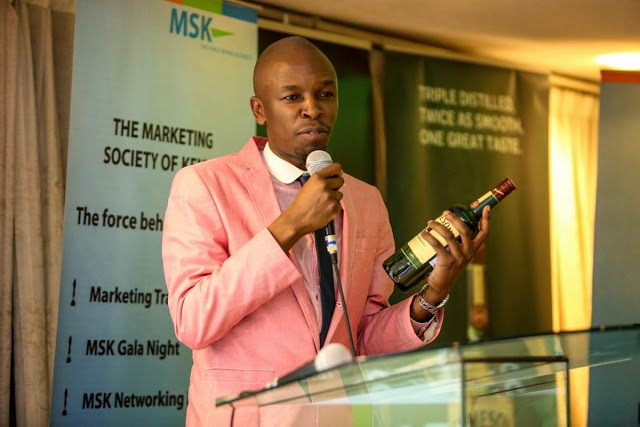 Majority of Kenyans in their prime years live by the mantra, ‘work hard, play hard’. They work relentlessly all through the week and will throng the clubs and pubs on the weekend to catch up with colleagues over a drink or two. Nelson’s search for a premium drink came long after countless night- outs. He always ended up hung over and lethargic after drinking what was bland and distasteful beer or wine. ”Why should I pay to suffer? I needed to find value for my money,” he says.
Two of his other friends felt the same way and joined him on his quest to find the ‘it’ drink. It was not easy and after some years they stumbled on what they thought was the drink to beat. This magic drink tasted like heaven. It was music in your mouth and it had no hangovers whatsoever. They bought at least one bottle in every pub and they made people drink it. They had a huge following in a span of a few months. People wanted to be associated with them and the drink had some kind of demand. The margins were remarkable. With the revolution spreading like bushfire, bars and outlets stocked the drink, more events were created with its name and Nelson and his friends became a brand. They were known as the ‘Jameson’s crew’.
“We had to make people try it. We were not in it for the profits and we didn’t even know which company manufactured the drink”, says Nelson.
Due to the increased demand, the company that owned the brand got wind of the news that some whisky aficionados in Kenya were advertising the brand. They were greatly impressed and looked for Nelson and his friends through their distributors, Viva Distributors and even visited them in Kenya.
This company is Pernod Ricard which was formed in 1975 after a merger between Pernod and Ricard which were French companies. These two companies were competitors that merged. These companies dealt with premium wines and spirits of the world. Pernod Ricard has 48brands in their portfolio among them Chivas, Ballantines, Jameson, Malibu, royal salute, Glenlivet and Martell. These are super premium drinks targeted at the highbrow market. 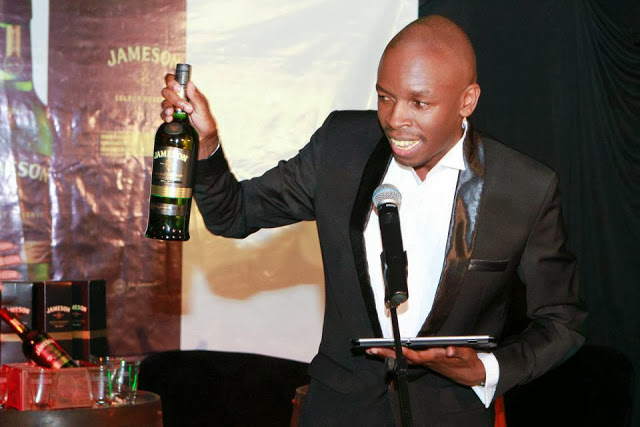 Nelson‘s roles include coordinating and mentoring brand ambassadors in Africa, participating in product launches and events, sharing product education among others. He is a master in Scotch whisky and he has been to Paris, London, Scotland, Madagascar and a host of African countries.
Nelson says that loving what he does and having passion is what has made him excel. He also points out on the relevance of a brand having a face, “People love speaking to people than a brand. It is more effective to talk to a person than to read off a power point presentation”.
That was the story. Jameson appointed a new brand ambassador , George Karanu, a former Safaricom employee. Im working on getting an interview with him but that is a story for another day…
By Jean Wandimi|2014-07-05T21:06:56+03:00December 1st, 2013|Drinks Business, People|0 Comments